How to obtain Ability Stones in Lost Ark?

Players receive their first 5 Ability Stones during "The Road to Faceting" guide quest, which acts as a tutorial for how Ability Stones work. After this, the way to get Ability Stones is through looting in Chaos Dungeons and Guardian Raids. Note that in order to access these events, the player needs to reach Lv. 50. However, when getting hold of Ability Stones, players initially get unusable, raw stones. In order to use or equip them, they need to undergo a specific process named Faceting.


What is Faceting in Lost Ark?

[Ability Stone Cutter]. Ability Stones can also be traded, but only before Faceting. Once they are Faceted, they are equippable but untradable, so players must decide whether they want to keep the stone or trade it before completing the faceting process. Note that "unfaceted" Ability Stones show the corresponding Engravings in the inventory, but not its values. Instead, they show the highest and lowest possible outcomes for each one of the Engravings. 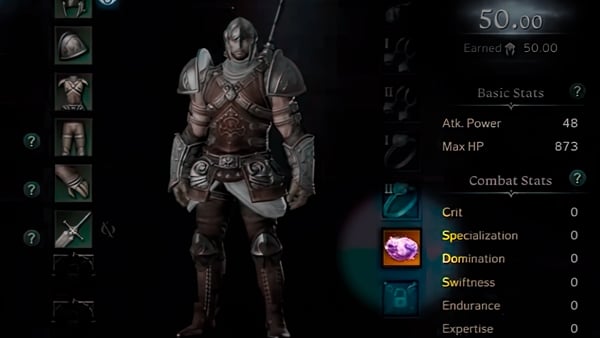 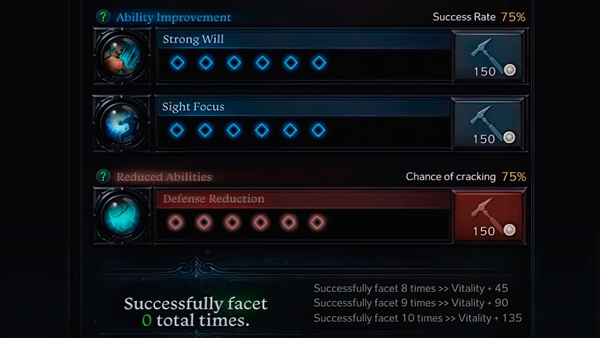 How does Faceting Work in Lost Ark?

Ability Stones have two positive Engravings and a negative one. These are are referred to as Ability Improvement and Reduced Abilities. Each Engraving has a row with a certain amount of empty slots (depending on the stone's rarity) and a Hammer Icon next to it. Pressing on this icon will cut the stone and yield a positive or negative result in the first slot of the corresponding ability. The chance of a successful hit is indicated by the "Success Rate" and "Chance of cracking" values. Starting value is 75%. Positive hits decrease these values, while negative hits raise them. This means that the more successful hits obtained in a row, the higher the chance of getting a negative one, and vice-versa. If the outcome is positive, then the ability gets one Engraving Point and a Vitality boost is gained, otherwise the slot is grayed out and can no longer be used. Then, you can press one of the three Hammer Icons again to keep filling in the remaining empty slots. Note that each try costs a predetermined amount of

(Silver), defined by the Stone's rarity.
In essence, a positive hit means the affected Engraving will have a bigger effect on Stats, but it'll also increase the chances of a bad result in the next try. The goal is to get as many positive hits (Engraving Points) on the Ability Improvement section, and as many fails (grayed out slots) in Reduced Abilities.

Stonecutter NPCs are located at the majority of cities under

[Ability Stone Cutter].
They are often found near vendors and traders.

Are all Ability Stones in Lost Ark the same?

Ability Stones are different between them in terms of Rarity, Engravings, and amount of Vitality Boost. Engravings, as mentioned before, are randomly generated for each stone. You can see the ones generated for each stone in the Inventory, or while talking to a Stonecutter NPC.
There are four types of Rarity for Ability Stones: Rare, Epic, Legendary and Relic. The rarest the stone, the higher is the value of Vitality boost, faceting point slots and attempt cost.
Rare Ability Stones yield 6 Faceting Attempts (empty slots for each Engraving) and cost 150

. Epic stones have an Attempt Cost of 165

and 8 Attempts while Legendary and Relic stones have 9 and 10 slots respectively, costing 210

Advices to maximize Engraving Points in the desired abilities while Faceting Ability Stones.

As mentioned before, the end goal is to get as many Engraving Points in the Ability Improvement section, and as many fails (grayed out slots) in Reduced Abilities (as we don't want to enhance Engravings with negative effects!). Regardless of available slots, the chance of success always starts at 75%. This rate moves ±10%, so It'll always be 75%, 65%, 55%, 45%, 35% or 25%. Maximum value is 75%, while minimum value is 25%, meaning no matter how many Failed Attempts (

For instance, if we are currently in 45% and hit a positive result, we gain an Engraving Point (

) for that ability and the "Success Rate" drops to 35%, so the chance of getting another positive outcome decreases. If we decide to take another chance against the odds, and happen to hit another positive result, we'll get another Engraving Point (

) and our new chance of success is now 25%. But if we get another Engraving Point (

) in the Ability Improvement section ("the positive abilities") while in the low risk zone (55% - 75%) . As long as we stay in this zone, the odds are in our favor. However, once the "Chance of Success" drops below 55%, and we enter the high risk zone, its more probable that we get a negative result wasting a Faceting Attempt (

) for the Engravings we want.  So the best strategy here is to "bet" on the Reduced Abilities section. Why? Simply because we are in the 25% - 45% range, and a low chance of getting a positive hit (

) is a low chance of enhancing the Reduced Abilities Engraving. Note that hitting positive results doesn't necessarily mean its positive (or convenient) for us. It just means that the ability that receives this result will be enhanced, even if its effect is undesired for our character.

Now, there's another layer of complexity in this strategy, and that is that we probably prefer one of the two Ability Improvement Engravings over the other. Maybe we like number one over two, or maybe number two is the one we rather enhance above number one. Whichever the case, we can now divide the "Chance of Success / Chance of cracking" range in three instead of two. So we'd have a high risk (25% - 35%), a mid-level risk (45% - 55%) and a low risk (65% - 75%) zones. The smart thing to do now is to hit on the preferred Engraving while we are in the low risk zone and hit on the second favorite ability when in the mid-risk zone, leaving the Reduced Abilities Engraving for the high risk zone.

All Ability Stones in Lost Ark