This Dungeon is a linear path, all enemies must be cleared to advance into the boss areas. The second boss of this dungeon has 2 phases after defeating them in their first phase the boss will move to a second location with a reset health bar and new mechanics. Each boss of this dungeon will have special phases that players will have to work through. This dungeon only has 1 full party wipe mechanic that is a stagger check in the final phase of the second boss, this attack happens twice. The other mechanics can lead to high and lethal amounts of damage but are not direct party wipes. 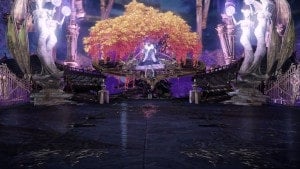 Boss Key Mechanics:
The first boss will teleport to the middle of the map at 8 and 5 health bars remaining and the camera will zoom out. Mirrors will appear on the edges of the room and a lethal wave attack will spawn in on one side of the map and travel to the other. Players will have to use the mirrors to teleport themselves behind the wave as the wave moves across the screen. There will be 2 waves each time, one from each side of the map.

The second boss comes with 2 phases and 2 maps. In the first phase the boss will start their main mechanic at 15 and 8 health bars remaining. This boss will teleport to the middle of the map and then the floor of the battlefield will tilt and giant boulders will start rolling down. The boulders will knock players up when they make contact and knock players towards the bottom of the battlefield where large spinning blades wait to deal huge damage to players. One player will get a status effect where they are targeted by a meteor attack that will fall on them after some time. If the meteor lands on the boss the phase will end and the fight will continue.

In phase 2 of the boss fight, the party wipe mechanic is introduced. At 34 and 26 health bars remaining a cutscene will play, after the cutscene the boss will have a stagger check yellow bar. Failing this stagger check will have the boss fire off its attack and wipe the party. This boss fight also has a second mechanic that occurs at 16 and 8 health bars remaining. A large meteor will land on the targeted player, failing to complete the mechanic will cause the players in the meteor range to be locked in place and forced to received the attack. Before the meteor lands the other players will be given 3 lights that they can use to shine on the targeted player to remove the locking portion of the attack but players will still have to move away from the meteor landing. When this mechanic repeats at 8 health bars one player will instead get a golden circle instead of the light that the targeted player has to stand within to clear the 3 light mechanic. If all players are not alive for the meteor mechanic, the targeted player can run to one side of the map and take the meteor away from the other players to attempt to get through the mechanic.

On completing the Abyss Dungeon Hildebrandt Palace players can be rewarded items from the list as follows:

Summary of Recommendations and Tips for the Boss fights

Watch for the mirror colors during the mechanic of the first boss to quickly identify and move through the correct mirrors to avoid the lethal wave. Stay at a medium range from the boss to be able to quickly respond to the AoE cone attacks that the boss uses frequently. When the boss uses the caged zone ability to lock players in, watch out for the boss attacks that follow up in the area. Make sure to bring stagger effects and save them for the party wipe mechanic to not fail the fight with the second boss. The player targeted by the meteor attack should stop moving to allow the other players to line up the lights easily, if the light is too close or too far the light may not register to clear the mechanic. It may be easier during the second time for the player with the golden circle to not move and have the targeted player position themselves in the circle then have the light players point to them. Watch out for when the boss uses the prisoning attack where they summon the illusions hitting small cones, the attack hits in a chaotic way so can be quite difficult to dodge. Being hit by the prisoning attack may lead to follow up attacks from the boss dealing more damage.

Key Mechanic:
When the boss is at 8 and 5 health bars they will teleport to the middle of the map. Mirrors will spawn on the edges of the map as the camera zooms out. Players can use the mirrors to move between mirrors of matching colors, the purple mirrors will teleport the player to the boss. A full width wave will spawn on one side of the map that travels to the other side killing players who get hit by it. Players have to use the mirrors to teleport to the opposite side of the wave to dodge the wave.

Strategy:
Watch for the mirror colors on opposite sides of the room to quickly find the safe portal to use, ping or stand around the correct mirror for others to follow. Using the mirror when the wave has reached the boss is a good way to not make a mistake with the timing of the waves. The boss does not move a great deal but often uses large area attacks. Players should watch for and be careful of the boss attacks especially during the caged zone attack.

Phase 2 Mechanics:
The boss uses all the attacks they did in phase 1, new attacks as well as empowered versions of the attacks from the first phase will also be introduced, at low health the boss attacks more rapidly.

Key Mechanic:
This boss has 2 phases on 2 maps.
Phase 1: At 15 health bars and 8 health bars the boss will teleport to the middle of the room then the floor will tilt and giant boulders will start rolling down. If hit by the boulder players will be knocked down towards the lowered end of the floor where spinning blades wait to deal huge damage to the player. One player will get a status effect where they are targeted by a meteor attack that will fall on them after some time. If the meteor lands on the boss, the phase will end and the fight will continue like before.

Phase 2: At 34 and 26 health bars remaining a cutscene will play then the boss will start channeling a big attack. This is attack comes with a stagger check and failing to clear the stagger will lead to the boss wiping the party.
At 16 and at 8 health bars the boss will use another mechanic that launches a meteor dealing massive damage to players, possibly wiping the party. If the mechanic is not cleared players in range of the meteor are imprisoned in place. 1 player will be the target player that the meteor will launch towards and is marked with a red X, when the meteor starts to fall they will have 3 empty slots show up above their character. The other players will be given lights that extend out of their bodies, on the second time this mechanic is used at 8 health bars, one of these players will be given a golden circle instead of a light. Players have to coordinate and point all the lights towards the target player to stop the binding effect or point both lights at the target and have the target stand in the circle, the meteor will still fall and players will have to escape its range.

Strategy:
The boss stays still in the middle for the entire main mechanic in their first phase however the big boulders will force players to keep moving to avoid being knocked into the spikes. The map will zoom out during this phase, watch out for if you are the player with the red meteor target and walk towards the boss to have the meteor fall on her to end the phase.
For the second phase make sure to have stagger attacks ready for the stagger check or whirlwind grenades otherwise the party will wipe. The meteor attack cannot be cleared if all players are not alive but the marked player can run away from the rest of the team to move the attack away from the rest of the team. The player targeted by the meteor attack should stop moving to allow the other players to line up the lights easily, if the light is too close or too far the light may not register to clear the mechanic. It may be easier during the second time for the player with the golden circle to not move and have the targeted player position themselves in the circle then have the light players point to them.
The prisoning attack hits in a very chaotic way, be careful of this attack as it can lead to more attacks hitting, this is especially dangerous in the second phase when the boss attacks more quickly and with empowered attacks.