This dungeon is a linear path, all enemies must be cleared to advance into the boss areas. This dungeon introduces a party wipe mechanic into the fight as well as a boss revival mechanic that can prolong the fight if done incorrectly. Players will have to coordinate with each other to make sure not to fail the mechanics.
The first boss does not move a great deal but the second boss has large map teleports with large AOE attacks. Keep track of the boss position using the minimap if you have to. 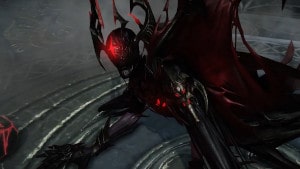 Boss Key Mechanics:
The party wipe mechanic is introduced by the first boss, the boss will roar and apply a stacking debuff to all players. The number of debuff stacks increasing during the fight and when the debuff reaches 5 stacks on any player the party will wipe and the run will end. Golden Orbs will spawn around the map that will clear and reset the counter on the debuff for the player using it. Take turns picking up the orbs so that the debuff does not make it to 5, using call outs in chat or agreeing on an order beforehand can help with this.
The second boss introduces a revival mechanic that triggers when it is low on health, this will happen more than once before the run ends. The boss will become invincible and fire off a white or red pulse that also leaves a floor effect of the color. Pairs of red and white orbs will spawn in each of the cardinal directions during this time. After a period of time the boss will stop being invincible and regain some health, if the players pick up the wrong orbs or too many matching colored orbs remain at the end of this duration, the boss can regain large amounts of health. To clear this correctly players have to select only the colored orbs that matches the color of the wave. It is best to coordinate beforehand which cardinal direction each player will take during this phase to quickly pick up all the orbs.

On completing the Abyss Dungeon Necromancer's Origin players can be rewarded items from the list as follows:

Summary of Recommendations and Tips for the Boss fights

For the first boss keep to its sides to easily dodge many of its attacks while dealing damage. Make sure that players understand the party wipe mechanic and take their turns picking up the golden orbs otherwise the party could wipe here. Understanding the second boss mechanic is less crucial for the run as it does not lead to a direct party wipe, however failing it can lead to the fight extending by a large amount. Assign each player a direction to head towards when the boss starts its mechanic to more quickly activate all the orbs. Make sure players know to only select the correct one and not select both, calling out the correct color may also help with this phase. Keep track of the second boss as it is quite mobile and may use large AOE attacks from far away.

Key Mechanic:
The boss will perform a roar that applies a debuff on to all players. This debuff will stack and if any player reaches 5 stacks all players will die and the run will end. The boss will roar multiple times throughout the fight, each roar the boss will also spawn a golden orb for players to pick up, the golden orb is visible on the minimap. When a player activates the golden orb they clear the debuff for themselves.

Strategy:
Stay on the sides of the boss closer to the tail to easily avoid the swipe attacks and move to safe zones quickly. Coordinate with the other players and take turns picking up the golden orbs so that no one gets to 5 debuffs stacks. Each player is assigned a number by their HP bars, these numbers can be used to set the order to pick up the orbs in an easy to understand and organized manner.

Key Mechanic:
When the boss is low the boss will become invisible and  fire off a white or red pulse that also leaves a floor effect of the color. Pairs of red and white orbs will spawn in each of the cardinal directions during this time. After a period of time the boss will stop being invincible and regain health, some of attacks from the boss are now empowered and more powerful.

Strategy:
The boss moves long distances during the fight, players can use the red attack indicators or the minimap to locate them. Remember what attacks you have that apply stagger effects for the stagger check, bringing and using whirlwind grenades to apply additional stagger can be useful. For the invincibility mechanic, coordinate with the team before the fight to assign each player a direction to take. Check the color of the floor effect if you miss the color of the initial pulse and grab the orb in your assigned direction to quickly collect all the orbs.