Island Stronghold in Lost Ark is a Private Housing mechanic that the player can unlock as they progress in the game. The Island Stronghold not only offers a customizable home space for players but a variety of practical features as well. Within their Stronghold, players can research various Crafting recipes and upgrades, craft items, send crew members on Naval Missions, passively train alt characters and more. This page covers information on the Island Stronghold and its many mechanics.

Aside from cosmetic features, the Stronghold also offers an array of facilities that provide practical features pertaining to Crafting, quality of life upgrades and even features that allow you to complete certain endgame content and acquire materials and resources in case you have no time to play. 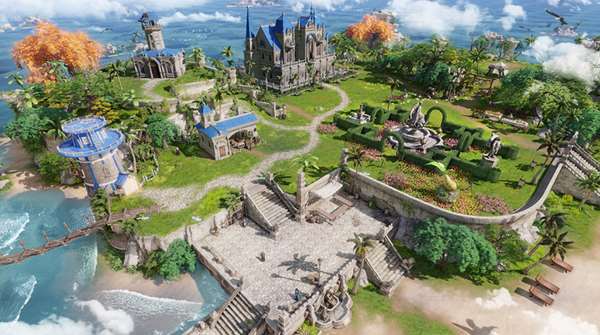 The facilities available at the Stronghold are as follows:

Most actions performed at the Island Stronghold will require the use of a special resource called Action Energy. Researching upgrades, Crafting items, Dispatching crew on Missions and training alts all cost Action Energy to varying degrees. Action Energy naturally builds up over time but there is a cap of 15,000 Energy and once at this limit, you cannot gain any more so make sure to always use your Action Energy when you can in order to avoid wasting it..

The Island Stronghold is unlocked by following your Main Story quests up to Eadalin's Gift in North Vern. After this is completed, you can accept the guide quest (purple) Secretary Theo's Invitation in your Quest Journal. The quest tasks you with meeting with King Syilian in Luterra who will grant you your very own Island Stronghold. Once the quest is complete, you will learn the Song of Hearth and Home Teleportation Song that will transport you to the Island instantly. Once in the Stronghold, speak to Adeline and follow her short quest line to learn the ropes and unlock the base features of your Stronghold.

The Lab is the most important Facility of the Island Stronghold. Within the Research Lab, you will be able to unlock features of all other Facilities such as Crafting Slots for the Workshop. Most things you can on the Island Stronghold will first need to be researched at the Lab.

You can access your Lab menu via the Stronghold Management Menu by pressing CTRL + 1 while in the Stronghold. Select the Lab to access the Research window where you can begin work on available research items. Interacting with the Lab itself within the Stronghold will also grant access to the Research window.  Available items will be limited in the early stages but more research items can be accessed upon leveling your Lab, which is also done through the Lab menu. Successfully researching certain items will also unlock more items in the same branch. Most research will require common Stone and Wood materials as well as Silver to complete.

The Crafting Workshop is used to create all manner of things such as Battle Items, Food, Stronghold Items, Life Skill Tools and more. The Workshop can be accessed via the Stronghold Management menu (CTRL +1) or by interacting with the Workshop itself.

As with all the Facilities on the Island Stronghold, you will need to first research the Crafting Recipes for items you wish to craft and then have the materials ready. Most of the items that can be crafted here will require materials gathered via Life Skills. You can also purchase those materials from players but if you're looking to save, it may be worth investing into one or more Life Skills.

All crafting projects will also require time to complete, with more complex recipes requiring longer. In the case of simultaneous crafting, each item added will increase the project's overall completion time. You can also spend Pirate Coins to reduce crafting time.

The Station is used to dispatch your Stronghold Crew of Sailors and Pets on your boats to take on missions and acquire various resources as well as Stronghold XP for you. The Mission menu can be accessed via the Stronghold Management menu (CTRL +1) or by interacting with the Station itself.

Before you can send your crew out on missions, you will first need to acquire a Ship. Ships can be unlocked by researching at the Lab. At higher Stronghold and Lab levels, you will be able to acquire more ships. There are two types of missions that can be undertaken: Normal Missions and Special Missions.

Normal Missions send your crew out to various locations around the world to resolve issues, fight off pirates and creatures and acquire treasure. These missions are automated and simply require Action Energy, some Gold and time. Normal Missions reward Pirate Coins, Stronghold XP, as well as various Seals that can be exchanged with Trade Merchants visiting your Stronghold. Normal Missions refresh every few hours, indicated at the bottom of the Missions window.

Upon selecting a Mission, you will see the Mission Information along with various Icons and conditions. These Icons are Specialty Skills possessed by your Crew. Sailors and Pets all have Specialty Skills and if matched correctly with the Mission parameters, will result in benefits to your mission such as reducing Action Energy costs, Ship Durability Loss, or improving your Adaptation Rate. The Adaptation Rate determines how many bonus rewards you will receive at the end of the mission. Ships also have their own Specialty Skills which, if matched with the mission, will reduce the time required to complete it.

In the early stages, you will only have access to 2 Sailor slots but you can unlock more as your Station levels up via research at the Lab up to a maximum of 4 Sailor slots. You will always have 1 slot available to send a Pet. Note that even if you send your Pet out on a Mission, you can still summon it elsewhere. Sending a Ship and crew out on a mission also requires that your ship has enough durability to withstand the predicted durability loss as a result of undertaking the mission. Durability can be rebuilt from the Missions screen by spending common Stone and Wood resources.

Special Missions send your crew out to complete endgame content for you such as Cube Dungeons, Chaos Dungeons, Platinum Fields, Guardian Raids and more. Similar to Normal Missions, these will require Action Energy, Gold and time. In addition, taking on Special Missions will use up the same special resources or daily limits as these activities would were you to do it yourself outside. For example, sending your crew out to complete a Guardian Raid will cost one out of two of your daily attempts, leaving you with only one left regardless of whether you send another crew out or do it yourself.

Special Missions do not reward Seals or Pirate Coins. Instead, they give the same rewards as the corresponding activity, modified by your Crew's Adaptation Rate. Similar to Normal Missions, Special Missions will have Conditions which you can match with your Crew and Ship's Specialty Skills to gain benefits. In general, it is not worth sending your crew to complete Special Missions unless you know you will not have time to do them yourself on a particular day.

Sailors can be hired via the Traveling Merchants found in your Stronghold while Pets are acquired through various activities outside.

The Manor is the largest structure on the Island but it serves a simple purpose. The Manor provides buffs and bonuses to activities within the Stronghold. This is done by equipping special Structures onto the Manor such as Fountains, Mailboxes and many more. These Structures can be crafted at the Crafting Workshop after their recipes are researched at the Lab. In the early stages, you are limited to 1 Slot for Structures, but you can freely switch between equipped Structures and can unlock more slots upon leveling up your Manor. There are many different Structures you can craft with varying effects such as reducing Action Energy costs for specific activities, gold and material costs, reduced time an more.

There is also an Outfit tab within the Manor menu where you can display your collected Outfits to gain their passive bonuses, much like the Structures. Outfits can be obtained by maxing out your Rapport with certain NPCs.

The Training zone allows you to train any of your Alt characters passively. Only characters level 50 and above can use the Training function. Furthermore, you can only train characters up to one level below your highest level character. For example, if your highest level character is at level 59, you will only be able to train alts between levels 50-58. Characters can train and accumulate XP for up to 7 days in a row and you can stop training at any time and collect XP relative to the time spent training.

Training costs Action Energy and Gold, increased by the amount of time you set for a character's training.

Trade Merchants are various NPCs that will come to visit your Stronghold, selling various goods in exchange for Seals obtained through the Station mission dispatches. Trade Merchants refresh once every server reset and each refresh brings a new set of items available for purchase. In order to allow Merchants into your Stronghold, you must first sign a contract with them via research at the Lab.