Tripods are used to upgrade Skills in Lost Ark. In order to obtain them, players must reach a certain level with their character. Each Skill has three different tiers of upgrades available. There are three upgrades at tier I and II, and two upgrades at tier III. Note that players can only select one upgrade in each tier, making this an important selection, allowing to create and explore different Builds or playstyles.

Most Tripods, just as Skills, can also be leveled up. Players get 282 total skill points, once they reach 55, which is the level cap in Lost Ark. Note that Skill points are character locked, this means that if you have another character created in the same account, you will have to earn all 282 skill points again.

Players can also earn skill points when using a Skill Potion, a Legendary and untradeable item that can be obtained by completing certain Quests or objectives.

The Tripod Skill system in Lost Ark allows players to upgrade or enhance their base Skills. This grants players a lot of choice and adds an endless amount of versatility in order to create your own custom build, assuring that each player can adjust their build to match their gameplay style. Players have to level up a Skill, using

The tripod is divided into three different tiers, and each of them is unlocked the more you level up a Skill:

It is important to note that players can only select 1, and only 1 Tripod per Tier level. This means that among the 8 possible upgrade selections per Skill, players can max out at three.

You can see that most Tripods have two different descriptions. One for PVE and one for PVP. Most of the time, they remain the same, among both styles of play. Crowd Control (CC) abilities or Damage over time (DoT), are generally less effective in their PVP version, by paralyzing or stunning foes for less time or doing less damage over time than their PVE counterparts.

It is important to select the correct tripods before venturing to an activity. Some Builds may be effective to bring along a Raid, but useless for a PVP combat. Players can create presets with their prefered Builds to engage on different activities. 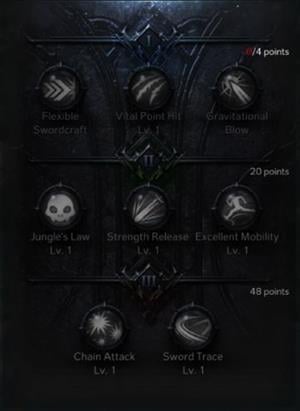 All Tripods in Lost Ark

You can search by Name, Class or effects. Just type into the search box what you are looking for.

Quick Search of All Tripods

The table is also sortable! Click on the header to sort it as you see fit.